The hair pulling disorder strikes individuals between the ages of 9 to 13.

Trichotillomania can affect patients repeatedly if it is left untreated

Trichotillomania, commonly known as hair pulling, is an impulse control disorder where one continuously pulls out body hair. People suffering from hair pulling disorder have a tendency to pull out hair from any body part, but the most common body parts are eyebrows, eyelids and scalp. The disorder is more common among females. The chronic condition of trichotillomania can affect the patient repeatedly if it is left untreated. In some individuals, the disorder can come and go for as long as a year. 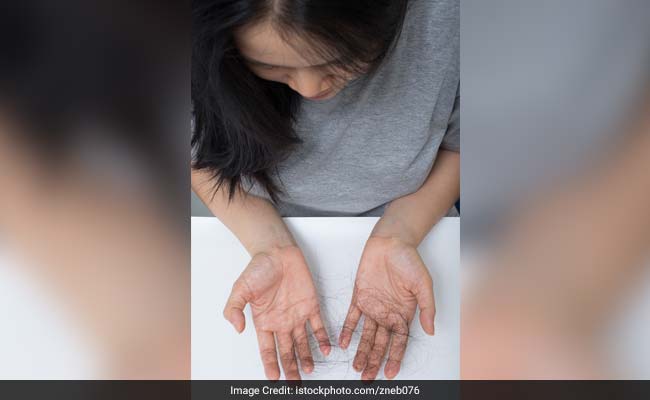 Scalp, eyebrows and eyelids are common sites of hair pulling under trichotillomania

The disorder mostly strikes individuals between the ages of 9 and 13. Emotional situations like boredom and anxiety, or occurring of stressful events like conflicts in family, physical or mental abuse or a death may trigger trichotillomania.

Winter hair care: Protect your hair from excessive exposure to the sun, pollution, rainwater, and dust. It can make the hair dry, brittle, and limp. So, try to protect hair as much as possible and if exposed to rain or dust, it's a must to wash it the same day.

Hair care tips for winter: Extreme dryness during the winter season can affect your hair too. Here are some tips you must try this winter to prevent hair damage during the cold weather.

The disorder is a medical illness where there is interference in one of the chemical messengers between brain's nerve cells. Genetic dispositions, stress and one's circumstances in life might also lead to trichotillomania.

Patients of the disorder might also have co-occurring illness like obsessive-compulsive disorders (OCD), depression and habits such as nail biting, thumb sucking and continuous scratching.

Some common symptoms of trichotillomania include constant pulling of hair leading to significant hair loss; experiencing a sense of tension before the urge to pull hair begins; experiencing pleasure and gratification on pulling out hair; there is no other mental disorder or medical condition which can be a causative factor for hair pulling; repeatedly trying to stop from pulling hair; experiencing more stress because of pulling hair and straying away from social and occupational gatherings.

Patients suffering from trichotillomania also experience loss of control and embarrassment because of being unable to function properly. Pulling of hair under this disorder is accompanied by specific patterns of hair pulling - for instance, pulling out hair in a particular way or only a particular kind of hair. Some individuals also try to manipulate their hair orally after pulling them out by either rolling them in between fingers, pulling them between teeth, biting them into pieces or even swallowing hair.

To diagnose if a person is suffering from trichotillomania, it is first examined as to how much hair loss has occurred by asking questions and discussing the condition with the patient. The doctor tries to identify the possible cause that may have led to the condition and any other mental or physical problems that may be associated with hair pulling.

The hair pulling disorder can be treated by therapy or medication. While the research done on trichotillomania is still limited, these treatments have helped many patients reduce hair pulling and even stop it entirely.

According to dermatologist Dr Kiran Lohia, the condition can be treated by helping people in changing their hair tying habits. "Patients can tie their hair most of the time to avoid continuous pulling of hair. When you leave your hair down, you are more likely to play with them and pull them," she says.

She adds that trichotillomania patients can replace their hair pulling habit by trying different habits like a writing journal. "The disorder can be treated by anti-depressants and anti-anxiety medicines as they can help in reducing the tendency to pull your hair," she says.

Under the cognitive therapy, patients are made to recognise and examine the beliefs that they have with regards to hair pulling.

This is a behavior therapy which is considered as the primary treatment for trichotillomania. The patients are made to identify the situations where they are likely to pull hair and replace that with other behaviours. For instance, they are asked to clench fists in order to stop their urge to pull hair.

Under this therapy, patients are made to learn and accept their urge to pull hair and how to not act on them.

(Dr Kiran Lohia is a Dermatologist and Medical Director at Lumiere Dermatology, Delhi)