5 Habits That Can Prevent Kidney Stones

Having to pass a kidney stone out of the body is described to be one of the most unbearably painful experiences ever. Here we have compiled for you, 5 habits that can be developed with not much difficulty to ensure the healthy functioning of your kidneys:

Having to pass a kidney stone out of the body is described to be one of the most unbearably painful experiences ever. Unfortunately for most, this torturous experience is not a one-time affair - the chances of getting another kidney stone increases by 50 percent in the next five years after the first one and up to and 80 percent recurrence in the next ten years. However, with some determined measures, kidney stones can be prevented.

Taking preventative measures as the following would be much easier and sensible than having to go through the excruciating pain of passing a kidney stone. Here we have compiled for you, 5 habits that can be developed with not much difficulty to ensure the healthy functioning of your kidneys:

1. Stay hydrated throughout the day

Usually the fluid in the urine prevents the accumulation of the chemicals that have the potential to form crystals, and kidney stones are formed when there is not enough fluid for the proper functioning or when the solid waste content is high in the urine. Hence, drinking at least 8 glasses of water throughout the day is a preventative measure that should be emphasized upon the most. Water based foods such as watermelon, celery, fresh fruits or juicy vegetables can be added to the list. It may be helpful to include citrus beverages in the diet such as lemonade or orange juice as the citrate in them blocks stone formation. Also, caffeinated or carbonated beverages can increase the risk of the formation of kidney stones, so it is advisable to stay away from them.

How To Include Apple Cider Vinegar In Diet, Nutritionist Anjali Mukerjee Answers

Apple Cider Vinegar is prepared by fermenting the sugar from the apples. 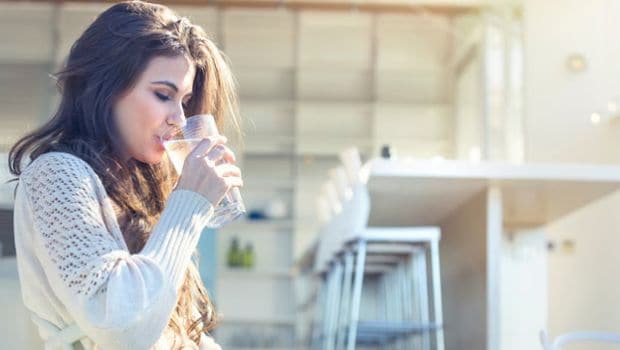 Also read: How Does Diabetes Affect Your Kidneys?

2. Try to minimize the salt intake

A bonus for the heart and the blood pressure, reducing the sodium content one's diet is a must if one wants to prevent the formation of kidney stones, as a high sodium diet increases the amount of calcium in the urine which ups the odds for kidney stones. Too much of sodium can also lead to water retention, which in turn cause dehydration.

3. Get the calcium you need

Getting too little calcium can cause the rise of oxalate levels, triggering the formation of kidney stones. To ensure your body has a healthy level of calcium in it, include foods like salmon, kale, nuts, seeds in your diet. However, due to its linkage with kidney stones, one is advised to take precaution when dealing with calcium supplements.

While being a rich source of nutrients, animal protein is acidic in nature resulting in a boost in the uric acid that catalyzes the formation of kidney stones. A high protein diet also reduces the level of citrate, the compound shown to flush out kidney stones and impair their growth. Limiting animal protein will prevent the decrease of our urine's ability to inhibit the accumulation of calcium oxalate.

5. Refrain from the consumption of stone forming foods

Kidney stones can be constituted of different elements forming different compounds. However, the most common compound that builds up a kidney stone is calcium-oxalate. Hence, it is wise to restrict oxalate intake which would require moderation while eating foods like tea, beets, chocolate, grapefruit, rhubarb, spinach, potato, asparagus, berries, nuts, etc. Colas should also be avoided as they contain phosphates which contribute to the formation of these kidney stones. Alcohol which increases fluid output while inhibiting fluid absorption can be the cause of dehydration and hence should strictly be avoided.