E-Cigarettes: Harmless New Fad Or Another Stick To Death?

While e-cigarettes are often promoted as safer alternatives to traditional cigarettes, which deliver nicotine by burning tobacco, little is actually known about the health risks of using these devices.

Humans in every part of the world experience this. A form of gravity that makes them do things that clearly threaten their possibility of a long life. While the dangers of consuming alcohol, smoking a cigarette or living off a diet of fast food are well documented and available for public view, a relatively new product to enter the sin-good market are e-cigarettes and the jury is out to decide how exactly this innovation will add to our list of worries.

So what exactly is an e-cigarette?

Put simply, it is a battery operated stick with the purpose of delivering nicotine to the users. It has liquid nicotine that vaporizes inside the stick, which the user inhales. It does not need to be burned and has an LED light instead at the tip, to resemble a burning cigarette.

This fancy stick generally has a replaceable cartridge filled with liquid nicotine, some other chemicals and flavorings, like bubble gum or cherry, to please the taste buds of different users.

E-cigarette advocates (yes, they really exist!) vouch for its use under the false argument that these are a healthier substitute to regular cigarettes.

How is it different from a regular cigarette?

World No Tobacco Day 2021: The Connection Between Smoking And Lung Cancer

World No Tobacco Day: Tobacco consumption kills around 8 million people a year around the world. India is the second largest consumer of tobacco globally, and accounts for nearly one-sixth of the world's tobacco-related deaths.

World No Tobacco Day is observed on 31 May every year. The theme for this year is 'Commit To Quit'. This day tries to create awareness about the dangers associated with the consumption of tobacco.

Well apart from the obvious difference in terms of the electronic nature of the nicotine delivery system in an e cigarette, there aren't other major departures.

In fact, according to a risk assessment study conducted by the Norwegian Institute of Public Health, e-cigarettes contain the same amount of nicotine as normal cigarettes. This means that you can expect to be prone to all the harmful effects that the traditional stick carries.

One other difference is that an e-cigarette, unlike the regular one is tobacco free. However, contrary to popular belief, it is not tobacco that causes cancer but the chemicals in these sticks. E-cigarettes contain a whole list of toxic chemicals according to the study by Johns Hopkins Bloomberg School of Public Health. This includes lead, manganese and chromium among others.

India is home to 275 million tobacco users. Cigarette consumption is a prevalent weakness in the country among other menaces that plague the health of the nation. The most common diseases being lung cancer and tuberculosis.

According to Dr P C Gupta, director of Healis Sekhsaria Institute of Public Health in Navi Mumbai, e-cigarettes are a gateway for adolescents to start smoking. It is also a preferred alternative for women since it is assumed to be a cleaner alternative to cigarettes.

Action has already been taken in some Indian states to combat this menace. While the Punjab government declared e cigarettes illegal in the state in 2013, Maharashtra FDA also acted quickly in Epproaching the Drug Control Office in India to regulate the e cigarette business. However, these sticks are commonly available online on every major e-commerce website. 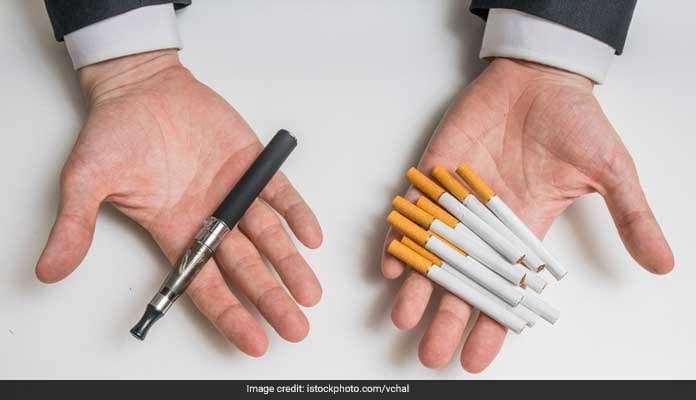 Final Word: Yes or No?

The attractive packaging and labeling of these e-cigarettes along with the false premise of being a healthier substitute is luring many to try these deadly sticks.

An e-cigarette can seriously damage your body-

E-cigarettes can contain diacetyl, a flavoring agent known to cause serious lung disease. Also, the nicotine can cause permanent lung damage.

Smoking e cigarettes can lead to a higher risk of heart attack due to the increase in your blood pressure while you smoke.

A study had also found that smoking e cigarettes can suppress hundreds of important immune genes, causing major harm to your immune system.

While conclusive research is not yet available on whether this innovation can cause people to give up smoking, it is easy to see that the negatives far outweigh the benefits of using an e-cigarette.

Dr Neeraj Jain mentions that e-cigarettes were invented and marketed as devices to be used for smoking cessation. However, like a lot of other gadgets in the market, users go by what is advertised rather than facts.

"E-cigarettes can contain significant quantities of nicotine and may not help in de-addiction. In fact, they may worsen it or lead to other addictions. There is harmful smoke content like dicetyl which can cause irreversible lung damage. The design includes a liquid component which if consumed accidentally, can be hazardous," he says and adds that the supposedly 'safe' label may encourage younger children and adults to take up vaping as an alternative to smoking regular cigarettes.

"There are no scientific studies that prove conclusively the efficacy of e-cigarettes in helping giving up smoking. Till date, the best methods for smoking cessation are the conventional methods of which the person's own resolve plays the most important role," concludes Dr Neeraj.

Role of Diet In Monitoring And Managing Diabetes

Skincare Tips: Get Glowing Skin This Festive Season With These Ayurvedic Tips

What Is Zika Virus? Here's All You Should Know