Home »  Nutrition »  Stunting, Malnutrition And Its Impact On India's Workforce

Stunting, Malnutrition And Its Impact On India's Workforce

Stunting has permanent and irreversible consequences, hindering the physical and mental development of an individual. It has been associated with a high risk of diabetes, obesity and hypertension, etc. While the importance of preventing stunting far exceeds the economic aspect, it is important to be aware of all the benefits and returns that investing in nutrition can bring for the country.

Stunting has permanent and irreversible consequences

India, home to the largest population of children (under 15 years of age) in the world, sadly also has to cope with the highest number of stunted children globally. According to the latest National Family Health Survey (NFHS 4), 38.4% of the nation's children were stunted in 2016 - a 10 percentage point decline over the last decade. Stunting is a condition associated with chronic malnutrition among children during the first 1000 days of life (from the beginning of pregnancy up to age 2) and leads to hampered growth (low height-for-age).

Stunting has permanent and irreversible consequences, hindering the physical and mental development of an individual. It has been associated with a high risk of diabetes, obesity and hypertension in future, an underdeveloped brain, poor performance in school and reduced earnings. In fact, estimates suggest that stunted children earn 20% lesser as adults compared to healthy individuals, which has potential implications for national development as well. A recent report by Save the Children estimated that a shocking 48.2 million children in India are stunted, equivalent to the entire population of Andhra Pradesh.

As an important indicator of malnutrition, stunting is directly linked to the second, and indirectly linked to several other of the Sustainable Development Goals (SDGs), to which India is a signatory. In addition to the SDGs, the World Health Assembly (WHA) has also adopted a special set of six nutrition targets to be achieved by 2025 – the first of which is a 40% reduction in number of children under-5 who are stunted.

Combating malnutrition in the country has always been on the government's agenda. The realization that early childhood nutrition of an individual has permanent consequences for future life stages led to the introduction of several child nutrition focused schemes over the years. Launched in the 1970s, India’s Integrated Child Development Service (ICDS) is the world’s largest outreach programme for early childhood care and development, aimed at improving child nutrition and health by providing supplements, immunization, and health check-ups for children between 0-6 years of age.   However, a new strategy is now needed, that goes beyond the ICDS and recognizes that stunting reduction needs action from more sectors.

While the country has made progress in the reduction of stunting among children over the last decade, the trend has not been uniform. Stunting has been reduced from 48% in 2006 to 38.4% in 2016, at an average decline of 2.2% annually, but interstate variability remains extremely high (Fig 1).  A report by the International Food Policy Research Institute showed that prevalence of stunting was “very high” (>40%) in 6 states, “high” (>30-39%) in 12 states, medium (>20-29%) in 17 states and “low” (<20%) in 1 state. While there has been improvement in levels of stunting across all states, the most significant decline has been noted in Chhattisgarh with over a 15-percentage point drop in the last decade. Tamil Nadu, on the other hand, has had the least progress; nonetheless, the prevalence of stunting in the state remains well below the national average. 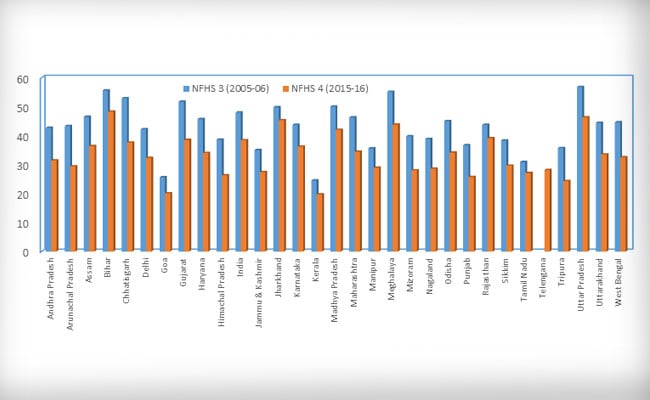 Data from the NFHS 4 further shows the variation in stunting between rural (41.2%) and urban (31%) areas in the country. While states on the outset may show signs of progress, there is a stark contrast in levels of stunting at the district level.  In other words, even though some states may overall have high or low stunting levels, the situation within districts of the state may be the opposite. Similarly, within districts also, rural-urban levels may be poles apart.

For instance, despite stunting levels in Odisha being 34.1% (also known as ‘high prevalence’) certain districts such as Cuttack (15.3%) and Puri (16.1%) are among the top 10 ‘low stunting level’ districts in the country. Similarly in Karnataka, districts like Mandya have stunting rates as low as 18.6% while others like Koppal have levels as high as 55.8%. Levels not only vary between states and districts but also within districts. Bardhamman, a district in West Bengal has 19.3% prevalence in urban and 42.7% in its rural areas.

These stark variations in levels across states, districts and within districts indicate that no one state is succeeding or failing completely. Therefore context specific efforts and in-depth study on state trends, changes and variations across districts is required, in order to help policy makers gain a better understanding of areas that need to be focussed on and factors that need to be addressed to accelerate progress.

Despite progress made, the state of nutritional well-being in the country is far from adequate. This is due to the fact that most nutrition-focused interventions that currently exist cater to the post-birth period. Studies indicate that maternal health and nutrition play a critical role on foetal birth and growth outcomes, along with a multitude of other socio-economic factors. Since maternal and child health are inextricably linked, maternal nutrition (pre and post-pregnancy) is extremely important for child development and therefore must be prioritised. It is important to highlight that while stunting may be a direct result of malnutrition, the problem is much deeper and several other indirect factors such as antenatal care, hygiene and sanitation, immunisation, education, gender empowerment, poverty alleviation, agricultural production, etc. contribute to it.

It is estimated that malnutrition can decrease the economic growth of a nation by approximately 8% due to loss in productivity caused by reduced schooling and cognitive impairments. Research suggests that $1 spent on nutritional interventions in India could generate $34.1 to $38.6 in public economic returns, three times more than the global average. As one of the fastest growing economies in the world, India requires a strong and healthy workforce to sustain its growth levels. According to NFHS 2 figures, 46% of children under-3 in India were stunted. Today, 18 years later, those individuals form an integral part of the country’s workforce and have perhaps been constrained in giving their best to the economy.  While the importance of preventing stunting far exceeds the economic aspect, it is important to be aware of all the benefits and returns that investing in nutrition can bring for the country.

To address this major challenge, India needs to adopt a multi sectoral approach on nutrition and effectively engage its multiple stakeholders in the planning, coordination, implementation and review stages. This would primarily require an understanding of how different sectors contribute to improvements in nutrition outcomes. There is a need for greater joint planning so that the government can identify ways of making different schemes, particularly core schemes, more nutrition sensitive.

However, the implementation of such schemes depends on the departments themselves. Each department should therefore execute their own implementation methods. Finally, it is imperative that all stakeholders jointly review the situation with the government on a regular basis in order to iron out and identify issues that different departments may have had during implementation, what the impacts of the programmes have been, and deliberate on what can be done better.

A truly multi-sectoral approach therefore would actively involve all government ministries and departments, civil society organisations and not be limited to nutrition specific but nutrition sensitive interventions. As Mr. Yuri Afanasiev, UNDP Resident Representative in India, recently stated during his opening remarks at a one day SDG consultation organised by the Observer Research Foundation and the Bill and Melinda Gates Foundation, “There is no copy and paste solution that India can use – I see it as a good thing”. If India is to achieve the WHA and SDG targets on stunting, it needs to take immediate action and build its own unique model for nutrition.

This article is the second in a four-part series discussing key issues on providing nutrition in India. It is a joint effort by scholars from the Observer Research Foundation - Oommen C Kurian, Priyanka Shah, Tanoubi Ngangom and Dr Malancha Chakraborty – with inputs from the International Food Policy Research Institute.

The opinions expressed within this article are the personal opinions of the author. NDTV is not responsible for the accuracy, completeness, suitability, or validity of any information on this article. All information is provided on an as-is basis. The information, facts or opinions appearing in the article do not reflect the views of NDTV and NDTV does not assume any responsibility or liability for the same.
COMMENT